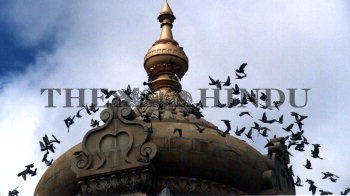 Caption : Pigeons flutter atop one of the towers of the Vidhana Soudha, a magnificent edifice in Bangalore, the capital of the southern Indian State of Karnataka. Housing the legislative chambers of the State Government, Vidhana Soudha is Bangalore's best-known landmark. It houses 22 departments and has 300 rooms. 2002-11-07.