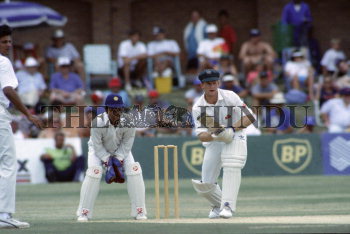 Caption : Jonty Rhodes of South Africa looking at the direction of the ball after playing a stroke as wicketkeeper Kiran More looks on during the third cricket Test match between India and South Africa at St. George's Park in Port Elizabeth, South Africa on December 28, 1992. Photo: V.V. Krishnan