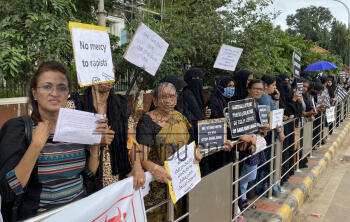 Caption : KARNATAKA , MANGALURU : 13/09/2022 : Women of various organisations staged a protest at Clock Tower circle, in Mangaluru on September 13, 2022 demanding re-arrest of 11 convicts of Bilkis Bano gang rape case in Gujarat. They also demanded severe punishment to Murugha Sharanaru of Bruhanmutt in Chitradurga, an undertrail, who is a prime accused in the sexual harassment case by two girls. PHOTO: MANJUNATH HS \ THE HINDU