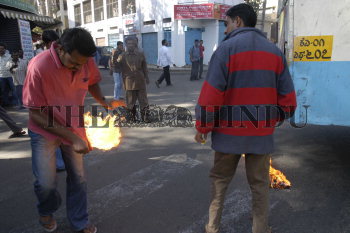 Caption : A miscreant tries to set fire to a BMTS bus while the public switched it off near Malleshwaram in Bangalore on January 21, 2005, during the BJP's rally to protest against the Benny Hinn's Festival of Blessing. Photo: K. Gopinathan