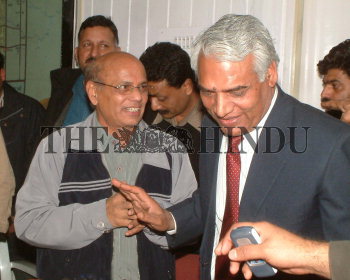 Caption : Kailash Baheti, Owner of the Rukmini Motors (The Maruti Car showroom) from Indore, thanking Director General of Police (DGP) of Madhya Pradesh S.K. Das(right) in Bhopal on January 18, 2005, after his release from abductors in Wardha (Maharashtra). Baheti was kidnapped on December 16, 2004 when he was on his morning walk, by Balinder Singh and gang who demanded a ramsom of Rs. 5 crore. Photo: A.M. Faruqui