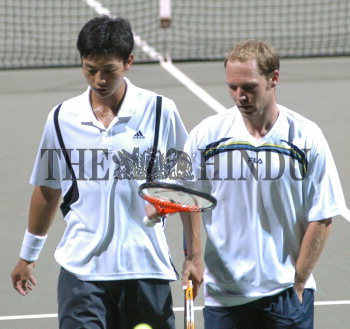 Caption : Yen-HSUN Lu of Taipei and Rainer Schuettler of Germany, who won the men's doubles semifinal against India's Leander Paes and Nenad Zimonjic of Montenegro (not in pic) in the Chennai Open tennis championship at the Nungambakkam stadium in Chennai on January 8, 2005. Photo: R. Ragu