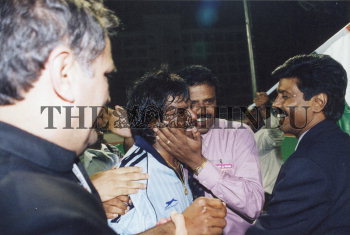 Caption : India's Dhanraj Pillay unable to control his emotions as he gets a pat from JOTHIKUMARAN, General Secretary, Indian Hockey Federation after India beat Korea in the men's hockey final of the Asian Games 1998 held in Bangkok on December 19, 1998. Photo: Vino John