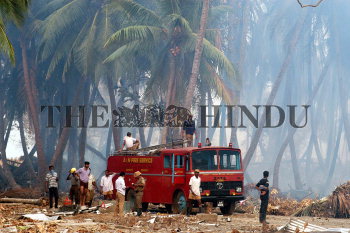 Caption : Fire engines trying to douse the burning flames, even a week after the killer wave tsunami struck Andaman and Nicobar islands on December 26, 2004. This is a scene at the devastated Malacca settlement in Car Nicobar. Photo: Parth Sanyal January 1, 2005