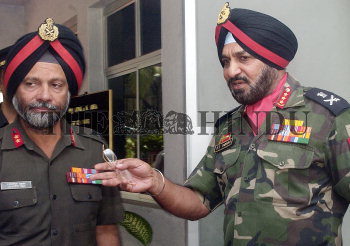 Caption : Lieutenanat General Balraj Singh Takhar, (right) General Officer Commanding in Chief, Southern Command, seen with Major General Paramjit Singh, VSM, the GOC of the Area after Takhar addressed the media conference, in Chennai on December 29, 2004. The Southern Command of the Indian Army has launched a massive effort with the civil administration to prevent outbreak of epidemic in the tsunami affected areas besides initiating relief and rescue operations in Tamil Nadu, Kerala, andaman and Car Nicobar Islands and in neighbouring Maldives and Sri Lanka. Photo: N. Sridharan