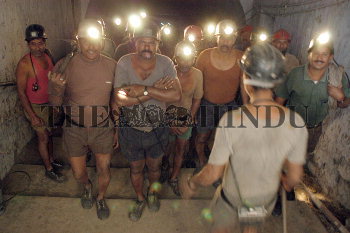 Caption : A group of employees of SINGARENI COLLIERIES Company Ltd. coming out of a mine at Kottagudem in Khammam district of Andhra Pradesh. The coal mining activites in Godavary valley was started in 1889 from the village called SINGARENI near Yellanadu of Khammam district by Hyderabad Deccan Coal Company. The company was renamed as SINGARENI COLLIERIES Company Ltd. in 1920 and listed on London Stock Exchange. The long history of this public sector enterprise reveals several ups and downs. But the ability of walking forward to see a better future of the company is just like mining new coal from below the earth. The company is completing its 115th year on December 23, 2004 and "SINGARENI Day" will be observed on that day. The company has organised a run with torches which will go round all its COLLIERIES and will be reaching Kottagudem on December 23, 2004 to boost the moral of the hard working employees. The company has also planned a three day fair to bring people together. Photo: A. Roy Chowdhury