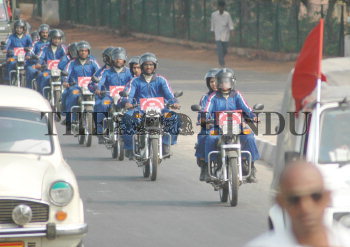 Caption : An all-India motorcycle rally of the cadets of National Cadet Corps from Kolkata, the first major adventure undertaken by the NCC at the national level, arrived in Visakhapatnam on December 20, 2004. Flagged off from Kolkata on December 1, it will reach New Delhi by the Republic Day. On January 27, it forms part of the Prime Minister’s NCC rally. It will return to Kolkata by February 14. The rally, sponsored among others by UNAIDS, covers almost all the States of the country and major cities traversing a total of 11,000 km. One of the main aims of the rally is to bring awareness about AIDS. Photo: C.V.Subrahmanyam