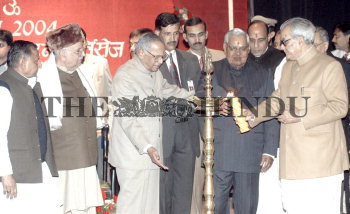 Caption : Vice President Bhairon Singh Shekhawat, former Prime Minister Atal Bihari Vajpayee, Uttar Pradesh Governor T.V. Rajeswar, and Chief Minister Mulyam Singh Yadav during the inauguration of a Scientific Convention Centre at the King George's Medical University in Lucknow on December 19, 2004. The centre has been built at a cost of Rs 22 crore from the Local Area Development Fund of several BJP MPs and MLAs mainly provided by former Prime minister Atal Bihari Vajpayee. It has turned out to be an imposing structure with an interesting blend of modern and Mughal architecture. It is equipped with all modern amenities on the lines of Delhi's Vigyan Bhawan. the centre's auditoria, banquet halls and suites had been built on upgraded technology that would suit the needs of the delegates and guests. One of the unique features of the building is its central dome that reaches 52 metres above ground-level and bears resemblance to Rashtrapati Bhawan's dome. Photo: Subir Roy