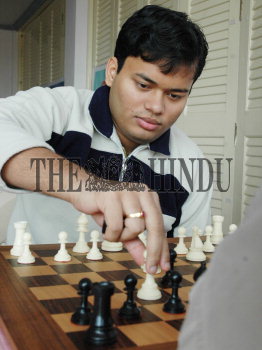 Caption : Surya Shekhar Ganguly making a move in the 16th round game against Koneru Humpy (not in pic) during the 42nd National 'A' chess championship at the Waltair Club in Visakhapatnam on December 15, 2004. Photo: C. V. Subrahmanyam