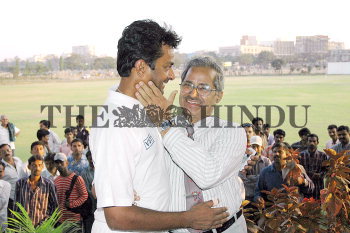 Caption : Former Indian spinner and Hyderabad captain S.L.Vekatapathy Raju tries to control his emotions as he announces retirement from first class cricket at the Gymkhana Grounds in Hyderabad on December 15, 2004. T.S.R. Anjaneya Sastry, his teacher in the Hyderabad Public School in Ramanthapur, who forced Raju to play cricket in school days, is seen with the cricketer. Photo: Mohammed Yousuf