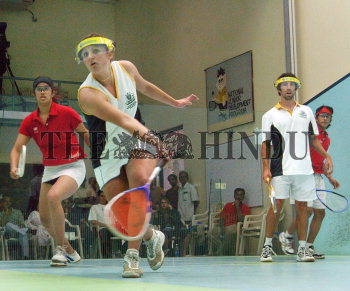 Caption : Australia's Dianne Desira goes for a shot in the mixed doubles match as her partner Cameron White and the Indian pair Joshna Chinappa (ext left) and Saurav Ghosal watch during the second World doubles squash championship at the TNSRA courts in Chennai on December 15, 2004. Photo: Vino John