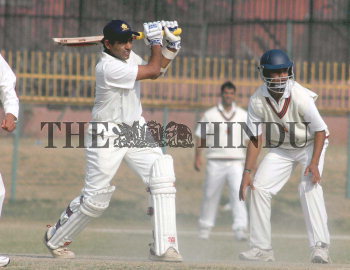 Caption : Karnataka's Robin Uthappa drives Sarandeep Singh (not in pic) on his way to a fine knock of 88 runs in the Ranji Trophy cricket match between Delhi and Karnataka at the Jamia Millia Cricket Ground in New Delhi on December 15, 2004. Photo: Sandeep Saxena