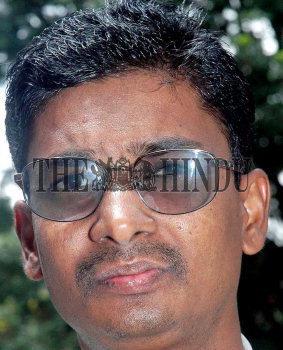 Caption : The new Minister of State of the Karnataka Government Satish Jharkiholi, during the swearing in ceremony at the Vidhana Soudha in Bangalore on December 15, 2004, when the Karnataka Chief Minister N. Dharam Singh (not in pic) expanded his coalition Ministry for the second time. The first expansion of the Ministry was on June 5, 2004. Twenty Ministers, nine from the Congress and 11 from the Janata Dal (Secular), were sworn in. Photo: V. Sreenivasa Murthy