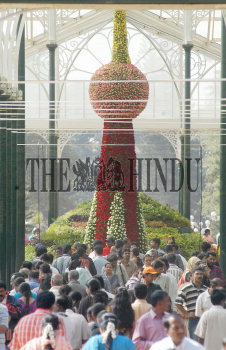 Caption : BANGALORE, KARNATAKA, 15/12/2004: A floral display at the 9th Nursery Utsav, a rose show and nursery fair at the Lalbagh Glass House in Bangalore on December 15, 2004, has attracted a large crowd. The Utsav is organised by the India Nursery Association, Rose Society of Karnataka, and the State Department of Horticulture. Photo: G.R.N. Somashekar