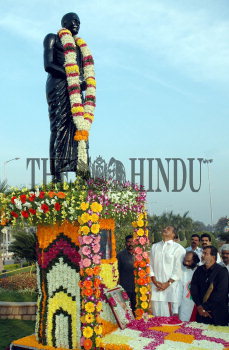 Caption : The Andhra Pradesh Chief Minister Y.S. Rajasekhara Reddy looks up at the statue of Amarajeevi Potti Sreeramulu, after paying homage on the occasion of his 52nd death anniversary in Hyderabad on December 15, 2004. Photo: P.V. Sivakumar