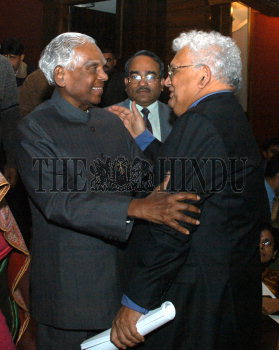 Caption : The director of the Centre for Study of Global Governance, London, and noted economist Lord Meghnad Desai, with the former President K.R. Narayanan, at the Maulana Abul Kalam Azad Memorial Lecture 2004, organised by the Indian Council for Cultural Relations (ICCR) in New Delhi on December 14, 2004. Lord Desai delivered the lecture on "Globalisation and Culture". Photo: Shanker Chakravarty