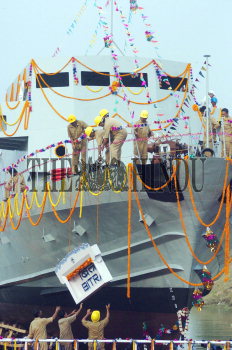 Caption : Workers of of Garden Reach Shipbuilders and Engineers Limited (GRSE) lowering the name board of INS Bitra after its inaugural float at the GRSE premises in Kolkata on December 14, 2004. INS Bitra is a fast attack craft for Indian Navy. The new sleek looking ship will be powered by two powerful engines with the most advanced machinery control system. The ship is capable of maximum speed up to 28 knots and is provided with modern communication equipment which includes satellite communication and global postioning system in weaponry. Photo: Parth Sanyal