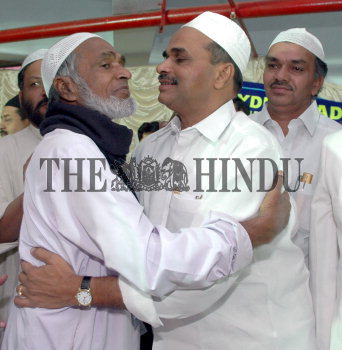 Caption : The Chief Minister Y. S. Rajasekhara Reddy warmly hugs a pilgrim at the Haj House in Hyderabad on December 13, 2004, before the first batch of pilgrims left for the annual Haj. Behind him (at right) is Mohammed Fareeduddin, Minister for Waqfs and Minorities Welfare. Photo: P.V. Sivakumar