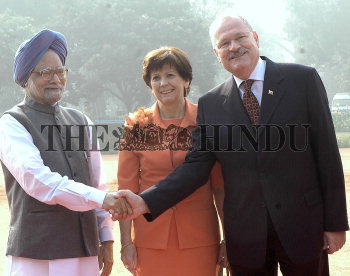 Caption : President of Slovak Ivan Gasparovic and his wife Silvia Gasparovic being welcomed by the Prime Minister Manmohan Singh, during a ceremonial reception at the Rashtrapati Bhavan in New Delhi on December 13, 2004. Photo: Anu Pushkarna