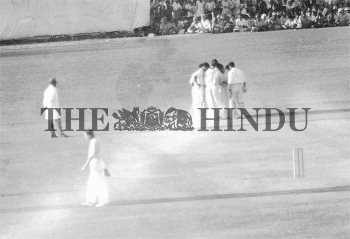 Caption : Commonwealth player Frank Worrell who got injured while fielding a shot from Indian batsman Hemu Adhikari being attended by his colleagues in the ground during the first test betwen the Commonwealth and India at New Delhi on November 07, 1950.. The match ended in a draw.