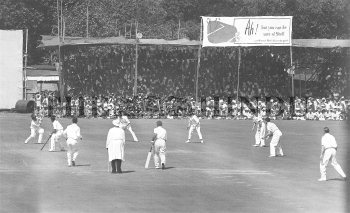 Caption : Indian captain Vijay Merchant leaving a ball from Commonwealth bowler Frank Worrell to the wicket-keeper during the third test between the Commonwealth XI and India at Calcutta on December 12, 1950.