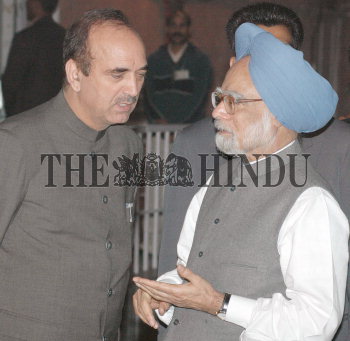 Caption : The Prime Minister Manmohan Singh with Union Minister for Urban Development Ghulam Nabi Azad at the All India Institute of Medical Sciences after visiting the ailing former Prime Minister P.V. Narasimha Rao in New Delhi on December 10, 2004. Mr. Rao who suffered a heart attack has been admitted to the Intensive Care Unit of AIIMS. Photo: Rajeev Bhatt