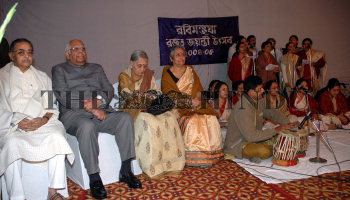 Caption : Lok Sabha Speaker Somnath Chatterjee along with others at Rabi Manjusha's cultural programme in New Delhi on December 10, 2004. Rabi Manjusha, the Delhi-based cultural organisation which has been a fountainhead of Rabindra Sangeet for New Delhi's "Probashi Bengali" community, is 25 years old now. The celebrations were set rolling by the Lok Sabha Speaker, Somnath Chatterjee, who stayed on to savour some Rabindra Sangeet. Photo: Sandeep Saxena