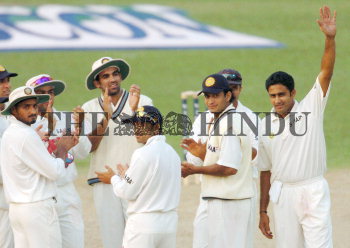 Caption : Indian team members applaud as Anil Kumble acknowledges the crowd, after getting his 435th wicket in test to become India's highest wicket-taker during the first day of the first cricket test match between Bangladesh and India at the Bangabandhu National stadium in Dhaka on December 10, 2004. Photo: V. V. Krishnan