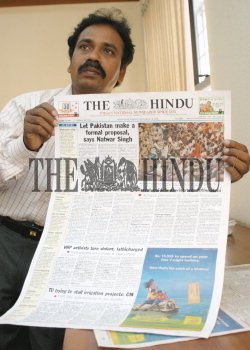 Caption : Darla Nageswara Rao, displaying a handwritten copy of 'The Hindu' in Hyderabad on December 10, 2004. A mere thought of doing something new and unique led Darla Nageswara Rao try his hand at making replicas of newspapers of various languages. He started off with the replica of a Telugu daily, and now he has come up with the 'carbon copies' of The Hindu and Urdu daily, 'Siasat', which is the proof of his perfection in this never-heard-of hobby.This 43-year-old from Tenali now plans to copy newspapers in various other languages, including Tamil, Kannada, Malayalam and Punjabi. He works as an artist in Government Central Press at Chanchalguda. Photo: K. Gajendran