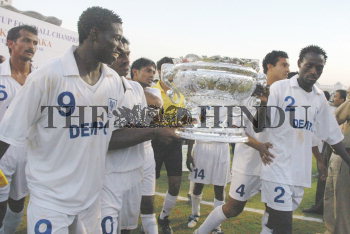 Caption : Team members of Dempo Sports Club with the Cup after beating Mohun Bagan in the final of the 26th Federation Cup football tournament at the Sree Kanteerava stadium in Bangalore on December 5, 2004. Photo: G.P. Sampath Kumar