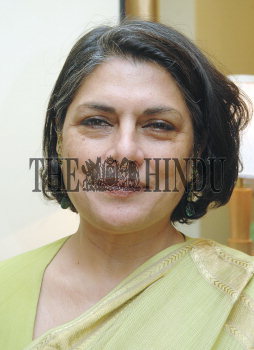 Caption : Delhi-based interior designer Sunita Kohli during her lecture on "Court jewels and the king's ransom: jewels of princes, signet rings, animal jewellery of the court and important diamonds" as part of "Jewelled Legends" organised by Apparao Galleries in association with Vidya Gajapati Raju Singh at Chola Sheraton in Chennai on December 09, 2004. Sunita who is known more for her interior design and restoration work, was the first Indian to be awarded the Padmashri for excellence in interior design and restoration for work on the former Viceroy's palace. This guest lecturer at Harvard and the Smithsonian Institute has been part of several prestigious projects, both in India and abroad. She is also writing books, including one on Awadhi cuisine and one on architecture for kids. Photo: K.V. Srinivasan. 9-12-2004