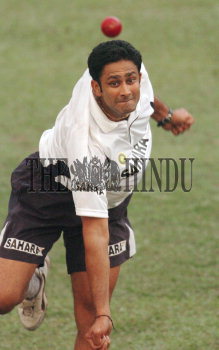 Caption : Indian leg-spinner ANIL KUMBLE in action during a practice session at the Bangabandhu National stadium in Dhaka, Bangladesh, on December 9, 2004. ANIL KUMBLE is just a wicket away from upstaging Kapil Dev's record of 434 wickets in Tests. India will play a two-Test series against Bangladesh. Photo: V.V. Krishnan