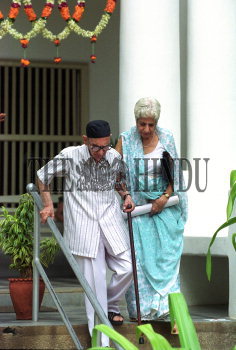 Caption : An elderly Parsi couple coming out of the Fire Temple in Hyderabad, the capital of the southern Indian State of Andhra Pradesh. Invocation of fire occupies the central place in the religious ceremonies of the Parsi community. The Parsis wear the sacred thread, whose ancestors, it is claimed belonged to a society that was traditionally divided into various orders of priests, warriors and peasants. They are believed to be descendants of the Aryans, a race which originally lived in the sub-Arctic regions near the North Pole. Zoroastrian Parsis migrated from Iran and settled in India around 900 AD.