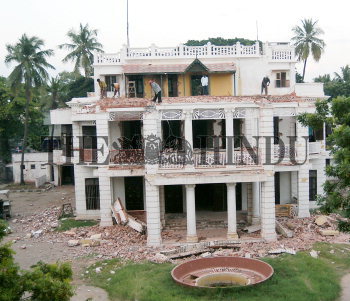 Caption : Another of Chennai's landmark, S.S. Vasan's house in Radhakrishnan Salai in Chennai, is being pulled down to give way to a modern structure. S. S. Vasan was a pioneer film-maker, and owned Gemini Pictures, which produced classics such as `Chandralekha'. He was also a publisher and began the Ananda Vikatan group of publications. The bungalow, which wore a deserted look for many years, was rented out for film and TV shooting. Photo: Bijoy Ghosh, 8-12-2004