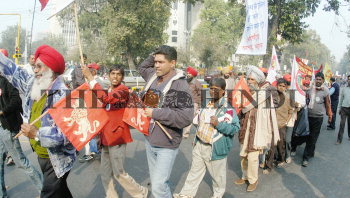 Caption : Members of the All India Forward Bloc (AIFB) taking part in a rally from Ramlila grounds to Parliament Street in New Delhi on December 8, 2004, in protest against the "unimpressive performance" of the United Progressive Alliance Government at the Centre and "to demand speedy implementation of the pro-people commitment of the Common Minimum Programme". Photo: S. Subramanium