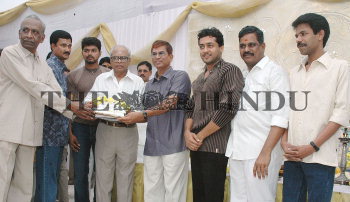 Caption : (From left) Director Mahendran, his son and director Jhoan, actor Vijay, director K. Balachander, director S.A. Chandrasekar, actor Surya, producer Kalaipuli S. Thanu and director Bala at the inaugural of the Tamil film "Sachin" in Chennai on December 8, 2004. The film has Vijay in the lead role with Jhoan as director and is produced by Kalaipuli S.Thanu. Photo: K.V. Srinivasan