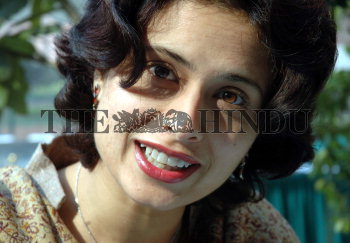 Caption : Akifa Mian, visual artist and performance director from Pakistan, in New Delhi on December 08, 2004. She and her Lahore-based theatre group are in New Delhi for the Old World Theatre Festival. Mian, the dynamic young Pakistani director whose Urdu production "Aadhi Baat" opened at the India Habitat Centre's Old World Theatre Festival, is the epitome of the sophisticated, progressive subcontinental woman. A graduate of the National College of Arts, Lahore, she majored in painting with sculpture, photography, and computer graphics as minor subjects. Photo: Sandeep Saxena