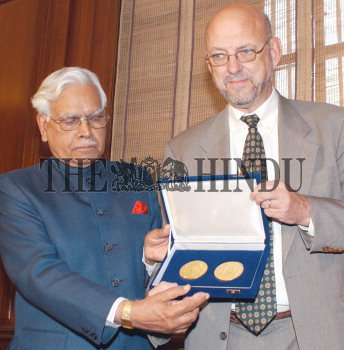 REPLICA OF NOBEL MEDAL OF TAGORE

Caption : The Secretary of State of Sweden, Mr. Hans Dahlgren presenting two replicas, one in gold and one in bronze, of the Nobel Medal for Literature of Rabindranath Tagore to the External Affairs Minister, Mr. Natwar Singh in New Delhi on December 08, 2004. The original medal, which Tagore received for his collection of poetry 'Gitanjali' in 1913, was stolen along with some other invaluable documents from the Viswa Bharati Museum in Shantiniketan in March 2004. Photo: S. Subramanium