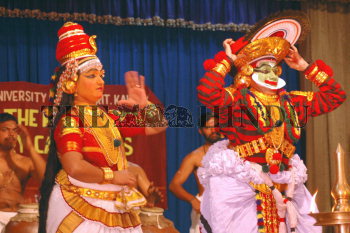 Caption : Koodiyattom performance organised at the Sree Sankaracharya University of Sanskrit, KALADY on December 07, 2004 in connection with the release of documentary cassettes on the art as part of its scheme, 'Strengthening of Sanskrit Studies'. The 100-hour work would be converted to CD format and distributed to schools and colleges in the State. Photo: Vipin Chandran