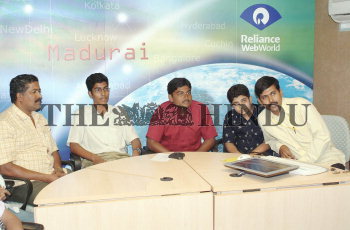 Caption : Winners of the Madurai Zone in the contest organised by the Reliance Web World interacting with the film star Silambarasan through video conferencing facility in Madurai on November 06, 2004. The Reliance Web World organised the session through a videoconference, set up at various centres as a part of promotional campaign. Photo: K. Ganesan