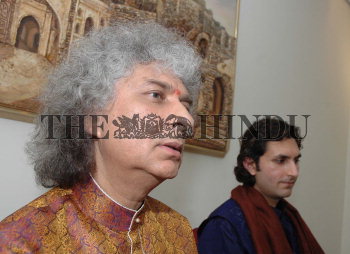 Caption : Santoor maestro Pandit Shivkumar Sharma and his son Rahul prior to a performance on the last day of the Taramati music festival organised by the Andhra Pradesh Tourism Development Corporation (APTDC) at the open-air auditorium of Taramati Baradari Culture Complex in Hyderabad on December 5, 2004. Taramati was a musician of great repute in the court of the Golconda sultan Abdullah Qutb Shah and hence the three-day annual musical festival has been named after her. Photo: P.V. Sivakumar