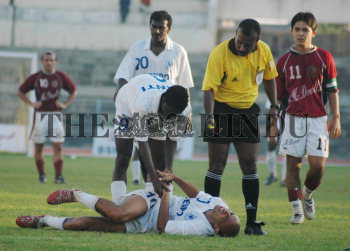 Caption : Cristiano Junior of Dempo Sports Club (Goa), who got injured, being attended to by teammate Ronty Martins before scoring the second goal during the final against Mohun Bagan in the 26th Federation Cup football tournament at the Sree Kanteerava Stadium in Bangalore on December 5, 2004. Cristiano Junior collapsed after scoring the second goal and died later. Photo: G.P. Sampath Kumar