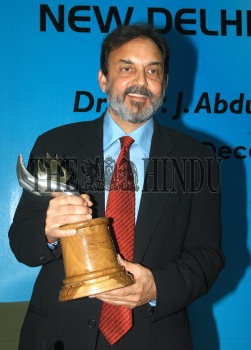 IPI-INDIA AWARD FOR EXCELLENCE IN JOURNALISM, 2004

Caption : Prannoy Roy, media personality and president of NDTV, was presented with the IPI-India Award for Excellence in Journalism, 2004, by the President A.P.J. Abdul Kalam, at a function in New Delhi on December 06, 2004. Roy received the award for investigative stories run by the news and current affairs television channel on the stamp paper scam masterminded by Abdul Karim Telgi and a baby-swapping racket. Photo: Shanker Chakravarty