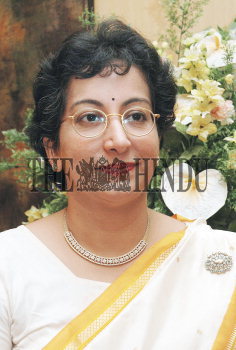 Caption : Padmaja Phenany Joglekar, a Hindustani/ghazal/bhajan exponent from Mumbai at Taj Coromandel in Chennai on December 05, 2004. Joglekar has set to tune poems of two former Prime Ministers and was awarded Padma Sri in 2001. She has received the S. D. Burman Award for best playback singing, Miya Tansen Award for best classical-based song for Marathi film ``Nivdung," and the Bharat Nirman Award. She is one of the pioneers who introduced the ghazal format to Marathi literature. Photo: K. V. Srinivasan