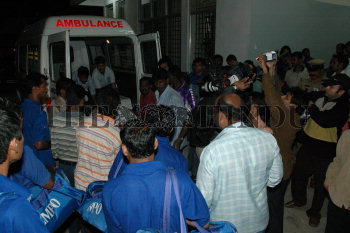 Caption : Dempo Sports Club of Goa, Cristiano Junior's body being taken to the Govt Hospital for Post Mortem from a Private Hospital after he died during the 26th Federation Cup football tournament at the Sree Kanteerava Stadium in Bangalore on December 5, 2004. Photo:G. P. Sampath Kumar