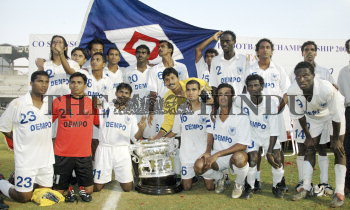 Caption : Dempo Sports Club of Goa team poses with the trophy, after beating Mohun Bagan 2-0 in the final match of the 26th edition of the Federation Cup football tournament at the Sree Kanteerava stadium in Bangalore on December 5, 2004. Photo: G. P. Sampat Kumar