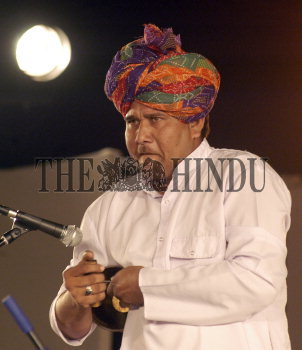 Caption : Folk musician from Rajasthan performing at the Taramati music festival organised by the Andhra Pradesh Tourism Development Corporation (APTDC) at Taramati Baradari Culture Complex in Hyderabad on December 4, 2004. Taramati was a musician of great repute in the court of the Golconda sultan Abdullah Qutb Shah and hence the three-day annual musical festival has been named after her. Photo: K. Ramesh Babu