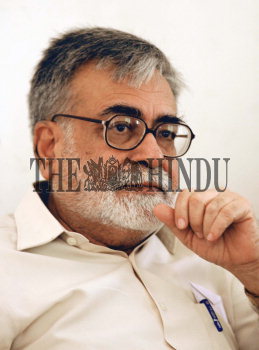 Caption : Narendra Kohli, Hindi novelist, short story writer, playwright, and satirist, talking to "The Hindu" about his works and the recent trends in Indian literature, in Thiruvananthapuram. Born on January 6, 1940, in Sialkot of Unified Punjab, which is now part of Pakistan, Narendra's family moved to Jamshedpur of Bihar after partition in 1947. His father, Paramananda Kohli, who was also a writer left the manuscripts of a few of his Urdu novels, for his writer son in his will. His mother tongue was Punjabi and the medium of instruction in school was Urdu. After obtaining his BA (Honours) degree from Ranchi University, he moved to Delhi for his Masters degree in Hindi. His PhD in Hindi was also from the University of Delhi. Narendra Kohli served in the Department of Hindi of the Motilal Nehru College for 30 years before he took voluntary retirement in 1995. Dr. Kohli was always fond of writing and getting published. It was in 1960, at the age of 20, that he started getting published regularly and he considers 'Do Haath' as his first published work. In his works, he has underlined the dilemmas of society through the medium of simple family events and characters. Dr. Narendra Kohli is also regarded as a trend-setter in the sense that he pioneered the creation of literary works based on the "Puranas". He took the entire material of Ram Katha and wrote a huge novel of 1,800 pages, "Abhyudaya" in four parts. This was perhaps the first novel in any language that dealt with the entire Ram Katha. Dr. Kohli's "Abhigyaan" was a novel based on Krishna Katha. And then Narendra Kohli started working on his "Mahabharat"- based novel "Mahasamar". He then surprised his readers with a new series of novels. "Toro Kara Toro" is a title obtained by translating a line from a poem by Rabindranath Tagore, but the novel is based on the life of Swami Vivekananda. Photo: S. Gopakumar 04-12-2004