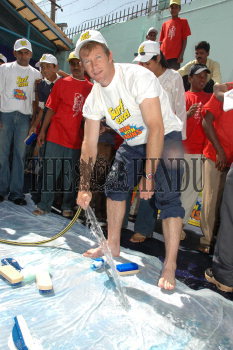 Caption : Former South African cricketer Jonty Rhodes pouring water on a washed cloth as school children stand behind him during the Surf Excel 'Win with Stains' Washathon in Bangalore on December 4, 2004. Surf Excel's 'Win With Stains' consumer promotion was started on October 1, 2004 and will end on January 15, 2005. Photo: K. Murali Kumar