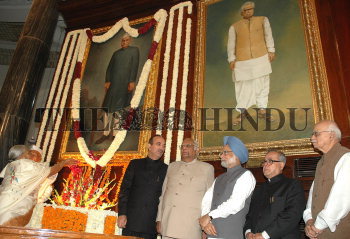 Caption : (From right) The Leader of the Opposition in Lok Sabha L.K. Advani, the Union Minister for Defence Pranab Mukherjee, the Prime Minister Manmohan Singh, the Lok Sabha Speaker Somnath Chatterjee and the Union Minister for Parliamentary Affairs Ghulam Nabi Azad, paying homage to the portrait of the first President of India, Dr. Rajendra Prasad, on the occasion of his 120th birth anniversary, in the Central Hall of the Parliament House in New Delhi on December 3, 2004. Photo: Rajeev Bhatt